1903
Discover
The Schiller Society was a male-only literary club at German Wallace College. This club also accepted members from Baldwin University even before the official merge of the two institutions.

“BEREA! I found myself in this village one evening last fall with two hours to wait for my train. How could I spend the time? No one seemed able to direct me to a place of entertainment, so, disgusted with my situation, I started out to see the "sights" of the town. While passing along one of its principal streets, I came up to a group of massive stone buildings. The upper story of the largest building was brilliantly lighted and, as I paused, sounds of music from several pianos reached my ears. Groups of young· men and a number of young women passed into the building. I decided that if there were any entertainment in that building for me, I would find it.. While hesitating a moment at the entrance, I was accosted by a bright young fellow, who asked if he could be of any service to me, and hearing my story, informed me that I was in one of the German Wallace College buildings on a “Society Evening.” I was very pleased to accept his invitation to visit his society, and accompanied him to his society hall.
I received a very cordial greeting from each member, and soon felt at home among them. From the first the scenes about me interested me greatly; so, in order to get a better view, I resigned myself to a chair in the farthest corner of the room. What impressed me most was the intense brotherly feeling which seemed to exist among the members. When one entered the room the first thing he did was to make his round among the boys, giving each a good old-fashioned Methodist hand-shake, spiced by a pleasant countenance and a few words of greeting. How much nicer this is than it was at my university ! There we had the pomp and splendor, but sadly Jacked the brotherhood.
The actions of the young men so interested me that it was some time before I took in the details of the room. It was· of a comfortable size, neatly and handsomely furnished. The chairs and tables were of the finest quartered oak, tastefully arranged. The velvety carpet and the soft blending shades of the frescoing lent grace to the whole. The front of 1he room was partitioned off by fret-work of rare workmanship extending from wall to wall, having an arched opening before the stage and a draped entrance to one side. In the upper panel of the fret work was found the society's motto: "Exercitatio artem Parat" in gilded letters. The neat little stage was backed by a beautiful bit of hand-painted scenery. To the right in a small opening was placed a life-size bust of Schiller. The sight of this bust in these surroundings recalled to my mind a long forgotten quotation from the great poet:

My reverie was disturbed by the sound of the president's gavel, and soon each member was seated in perfect order. After the religious ceremony, the society orchestra rendered a lively overture. The oration was delivered in regular Patrick Henry style by one of the older members, and the essay was an interesting production on a subject of national import. Stage fright was evident in but one of the eight numbers the recitation, the declaimer of which was one of the new members and this his debut. He knew his piece remarkably well, but his delivery was hindered by his heart trying to depart via his throat.
The musical talent in the society was very commendable and added much to the pleasure of the evening. - The last 'number was the humorous one, the newspaper, "The Schiller Sidesplitter." The editor showed much newspaper talent and rare wit and humor. When the president announced that the programme had come to an end and that there would be a pause of five minutes before the business meeting, I leisurely looked at my watch. To my greatest surprise I discovered that it was already past my train time! I had become so interested in the programme that I could hardly believe two hours had passed since I entered that room.
I shared one of the Schiller boys' rooms that night, and the next day left with my mind full of pleasant thoughts of the place where I had found entertainment.
C.W.” 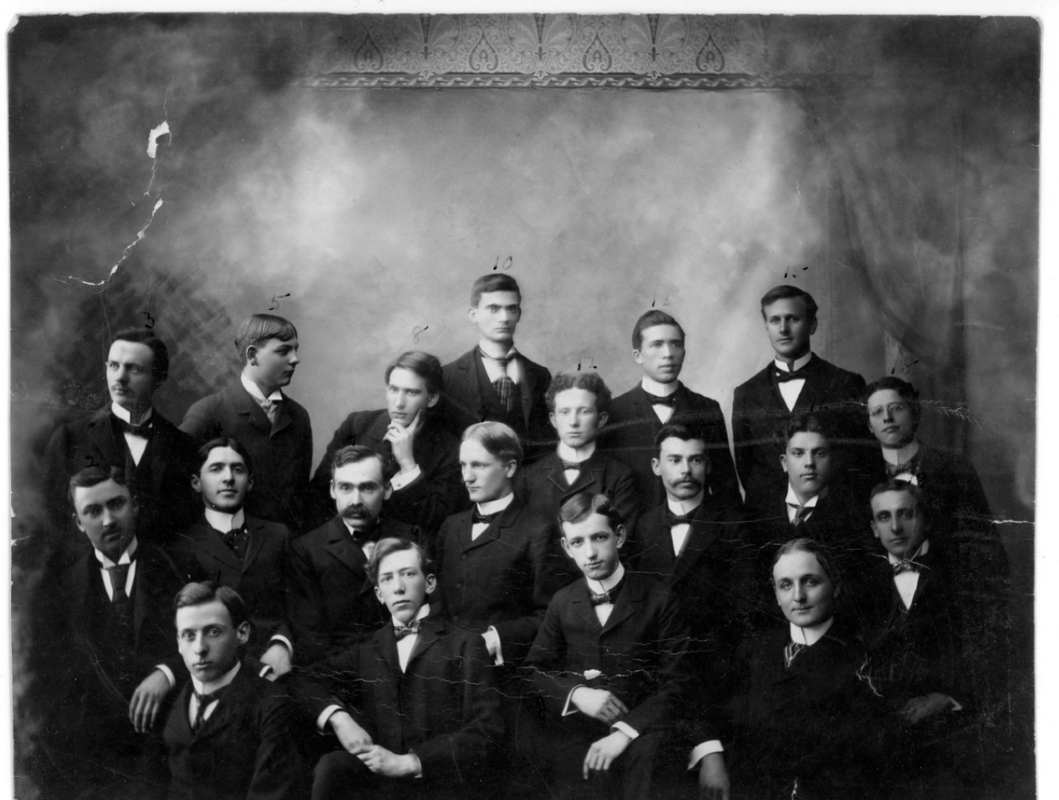